The hospital's culinary department has begun a series called “Kids in the Kitchen”. It is a monthly series of cooking demonstrations aimed at teaching kids about special diets, making good food choices and learning how to cook. We were honored and excited that the first class in this series was a gluten-free theme; making gluten-free snacks with granola.

We gathered in the Chef’s Playground located in the back of the cafeteria at the downtown Boston hospital. Chef's Playground is an open cooking area you can see into with a seating for viewing and interacting with the chef. While the demonstration was ongoing, it was broadcast on screens throughout the cafeteria.

The kids first had a chance to taste test gluten-free (GF) chicken nuggets. This is a recipe the culinary staff has been working on and plans to add to the hospital menu. The kids enjoyed the nuggets.

Chef Steve and Chef Travis talked about how to make a granola or trail mix. They talked about using cereal, dried fruit, nuts, coconut, seeds and maybe some GF granola that you purchased at the store. The key to good granola is adding the ingredients you like and skipping the ones you do not like. 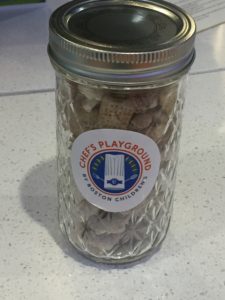 They used the granola as a snack on its own and taught the kids how to make it into a cereal bar. They made the cereal bars twice. One batch was made with GF all-purpose flour and the other with rice flour. The kids like the bars with both the flours but the all-purpose flour bar was preferred. The chefs told us that the bars are good to wrap up and take as a snack to school, sports practice or wherever you go.

To make the bars come out of the pan easily Chef Steve sprayed the pan with cooking spray. While he was doing this, he warned us that not all cooking spray is GF. In fact many of the sprays designed for baking have added flour. 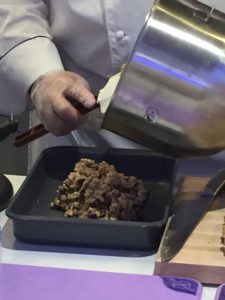 Chef Steve and Chef Travis made a treat that was similar to a Rice Krispy treat. They used the basic recipe but substituted GF Chocolate Chex. They drizzled the top of the treats with chocolate and taught the kids how to put the melted chocolate into a sandwich bag and pipe the chocolate onto the bars.

We had a lot of fun and left with snacks to take home. 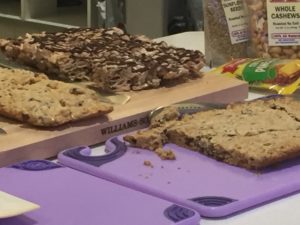 We want to thank Travis Morrow, Stephen Cooney, Michael Cogliandro, Michael Tracy and Shawn Goldrick from the hospital Culinary Staff for making this class possible. We also want to thank Jen Frank from the Hospital’s Hale Family Center and CKC Member for helping to arrange this program.

I am looking forward to the next class!

COVID-19 Vaccine is Now Available for Kids Ages 5 & Up

Does Pregnancy Induce Celiac Symptoms? Researchers Are Trying to Find Out

One Comment on “Kids in the Kitchen – Gluten-Free Granola Snacks”